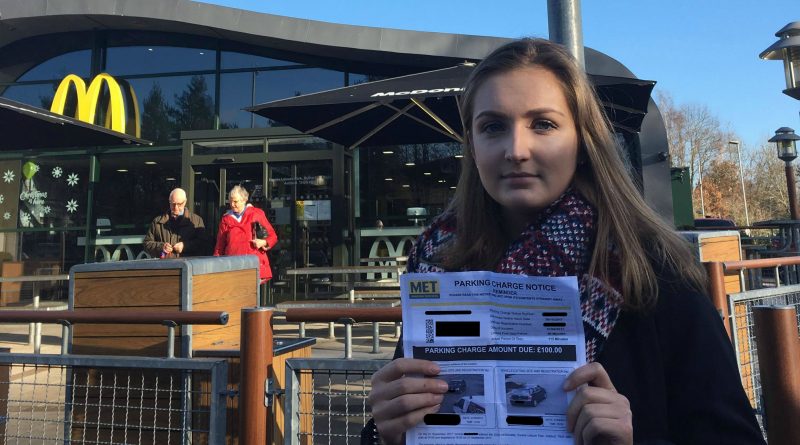 A McDonald’s in Ashford has caused frustration to drivers unaware they can cancel their parking tickets.

The McDonald’s car-park at Eureka Park is currently monitored by private parking firm, Met Parking, who restrict parking to 90 minutes.

People who have received these fines have had them cancelled by the franchise but many are unaware this is happening.

This happened to Bronte Sercombe who received a £100 fine after not opening her first letter. Unaware it was not necessary to pay she panicked and paid the lot.

She said: “I feel extremely frustrated that I had to pay a £100 car parking fine, especially as 2 weeks after paying it, I found out that other people managed to get away without paying it. I think that is it is very unfair and ridiculous that a car parking fine should be so expensive.”

Sam Hymers, 19, from Ashford received a parking ticket in July and did not pay it after a staff member offered to help him. He said: “I mentioned the ticket to one of the managers at McDonalds and they were happy to help me cancel it.” Lois Marshall, 18, from Ashford was given a ticket in October but refused to pay. She said: “I never paid it, I just ignored it as it’s private land. Lots of people told me they can’t enforce it like the council can.”

When contacting McDonald’s about the issue they responded: “At a number of our restaurants, parking restrictions are in place to ensure there is adequate parking for customers. Where restrictions are in place, we work with industry-approved contractors to ensure they are clearly signposted and communicated. If a customer feels they have been wrongly ticketed, we would encourage them to get in touch with the third-party contractor who issued the ticket by way of appeal.”