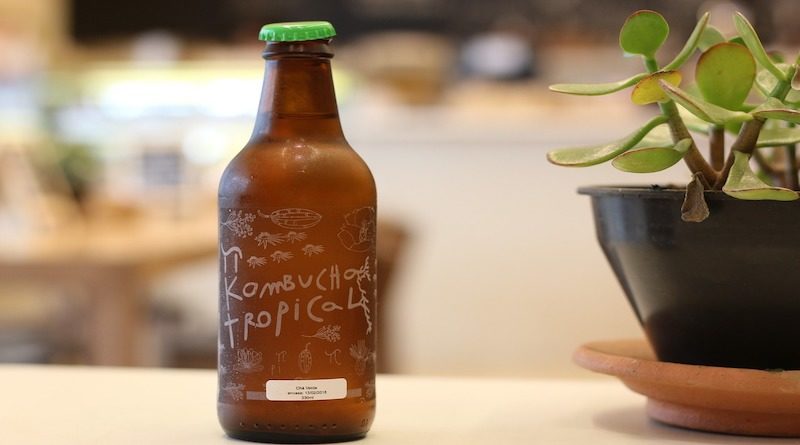 There’s a good possibility that you have heard of Kombucha. As it begins to creep into your local Sainsbury’s or M&S, its no longer confined to the safety of health food shops. But if you pick a bottle up from the shelf, or even attempt to make it at home, there is much more to Kombucha than you may have thought.

Kombucha is a sweet, fizzy  yet complex drink made from fermented tea. However it is much more than a simple cuppa that has been left to sit over the weekend.
At its simplest form, Kombucha is fermented sweet black or green tea.  But this base is often elevated to greater heights with the addition of fruits and spices such as raspberries, ginger, and apples. This endless possibility of flavour combinations is what makes Kombucha; not only tasty, but a fun and innovative drink to make at home.

One of the most striking things about Kombucha, is the way in which the sweetened tea is fermented. During the fermentation process, be sure to keep your sachet of baking yeast in the cupboard. To brew Kombucha, a slightly stranger method comes into play. The SCOBY, or ‘Symbiotic culture of bacteria and yeast’; as it is also known, is a slimy, alienesque, cellulose disc that houses bacteria and yeast cultures.
Once placed in a jar of sweetened tea; and left to do its work, microbes feed on the sugar, realise CO2 thus fermenting the tea into Kombucha. A convenient fact of SCOBYs is that not only can they be reused multiple times, but with each use, they multiply. As a result, even amateur brewers find themselves with a jar packed with ever-growing SCOBYs, often referred to as a SCOBY hotel.

The Past, Present and Future

Kombucha was first enjoyed by the Ancient Manchurians in 220 BC and its popularity slowly spread throughout eastern Asia.  Fast Forward into the next millennia, following the expansion of trade routes and this fermented tea can be found in central Europe. Kombucha became a firm favorite of Russians, taking the name of ‘Kambucha’ and found notable popularity  in Germany in the 20th century.  The ancient drink lost popularity during WW2 as tea and sugar shortages were felt across the globe.

However, in the 1990’s Kombucha was rediscovered by the health food scene of America, bottles of Kobucha became commercially available but remained out of favour with the mass market. As people became more focused on healthy lifestyles and desire new and unique products, the Kombucha market exploded.  In 2019 the European kombucha market was valued at $244 million. This figure is only expected to grow, with is predicted to grow to $703 million by 2025

For a drink widely believed to bring a wide range of health benefits, some debate if these claims are true. Such benefits include:


However, whilst many believe these claims, there is little evidence that supports them to be true. In fact there has been no tests on the effects of kombucha on the human body. So whilst these claims cannot be taken as truth, apprise tests are needed before they can be disclaimed.

Have you tried Kombucha?
Created with QuizMaker