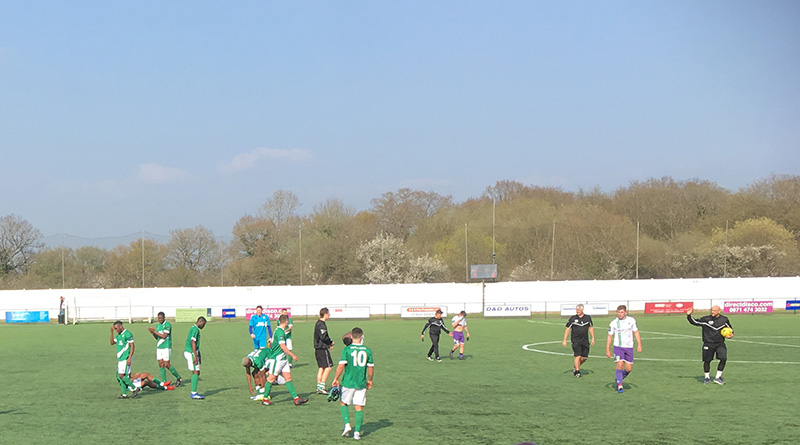 Ashford United edged closer to securing their Bostik South East play-off place after a comfortable 3-0 win over Guernsey at Homelands on Saturday.

Goals from Jay May and Jake McIntyre as well as a late Danny Parish strike were enough to see the Nuts and Bolts grab another three points, as they remain on course for second place in the league.

In a dominant display, it took the hosts just under 25 minutes to make the breakthrough.”

Goalscorer May said: “I think it was quite a slow start to the game, they came and sat behind the ball and tried to play out from the back, but we got the job done and it was a lot better in the second-half.

“It was nice to get on the scoresheet, especially when the build-up to the goal was so good. It was a great ball in from Danny and I just had to stick my head on it and hope it went in.

“Their keeper made a couple of really good saves, but one or two today I definitely should have done better with to get another goal at least.”

In a dominant display, it took the hosts just under 25 minutes to make the breakthrough. Great build-up play from captain Sam Corne meant he released Parish down the right and he beautifully crossed for strike-partner May to head in. It was another clean sheet for the Nuts and Bolts

With a hatful of chances to double their lead then missed, United had to wait until midway through the second-half to add a second. Defender McIntyre fizzed in a powerful cross that was deflected in via a Guernsey head, much to the relief of the home crowd.

Parish then got his 21st of the season and Ashford’s third with five minutes to go, the striker finding space on the edge of the box and firing in to the bottom corner.

Manager Tommy Warrilow said the only negative of the match was that his side hadn’t scored more goals.

He said: “It should have been more today – the second half performance was all one-way. I thought that the first-half we were a little bit lethargic but we made enough chances to win two games of football.

“The boys are all clever footballers, and we keep demanding more every game – that’s the message. Although it was 3-0 and we wanted more, the most important thing was to get the three points.

“We’ve got another big game next week against Hythe and we will treat them the same way we would treat Cray Wanderers who are top. If we do what we do right, then we’ll be fine.”

United will hope to follow up Saturday’s result with more clean-sheets when they face back-to-back away trips to Hythe Town and leaders Cray Wanderers respectively.

That's now 12 clean sheets for @AshfordUnitedFC for @SamMott021, and his fourth in succession.