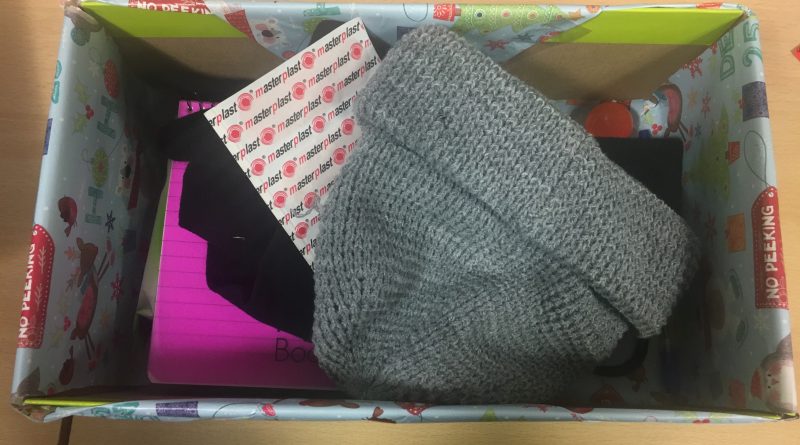 Volunteers in Canterbury wrapped presents for refugees in aid of the British Red Cross’ ‘The Big Wrap’.

Tom Habing, President of the British Red Cross society at the University of Kent, lead the event which was held on December 13 at the BRC First Aid Training Centre on Chantry Lane.

The volunteers have arrived and prepped themselves with boxes, wrapping paper and a hot chocolate (yum!)

Red Cross volunteers, Tom and Habing and Ben Weatherburn hosted the event and explained 16 boxes needed to be wrapped and filled with presents – let the wrapping commence!

So far, 13 boxes have been wrapped neatly (to the best of our ability) and stacked.

Not many more to go!

The volunteers have finished wrapping the boxes and are now sorting through the bundles of presents to put in them for the refugees.

Here’s a list of some of the gifts that the BRC put in a box for adults.

Tom mentions: ”we went bucket collecting on the high street and raised £100 through donations”.

Hats, gloves, sweets and many more gifts collected by bucket donations for the refugees. £100 made from UKC’s Red Cross Society ?#thebigwrappic.twitter.com/WdlbKskADp

The presents are being put into the boxes. Each box contains: a hat, gloves, toothbrush, cleansing wipes, a bar of soap, a notepad, two pens, a pack of Haribo sweets, plasters, hairbands and a bouncy ball.

The boxes are being filled with presents ? #TheBigWrap #BritishRedCross pic.twitter.com/zr9A1EsBGm

And that’s a wrap! All boxes are wrapped and presents put in ready to be shipped to Gravesend on December 18th and delivered to refugees across Kent.

Ben Weatherburn, Engagement and Development Manager for the BRC and who lead the event, talked to us more about the reasons why the BRC do ‘TheBigWrap’:

Wrapping for Refugees is a project aimed to spread a bit of joy among refugee families and networks across the UK.

Providing a few essential and fun items in decorated boxes can provide some much needed happiness among what can be a difficult period. Previously this campaign has been run exclusively in London, but demand has seen it launch on a national scale. The British Red Cross provides many forms of support to Refugees and Asylum Seekers in the UK, including unbiased casework, education and family reunion. It has been great to see the Red Cross on campus group at the University of Kent fundraise and run an event of behalf of this campaign knowing that their efforts will support refugee communities in their local area.’’