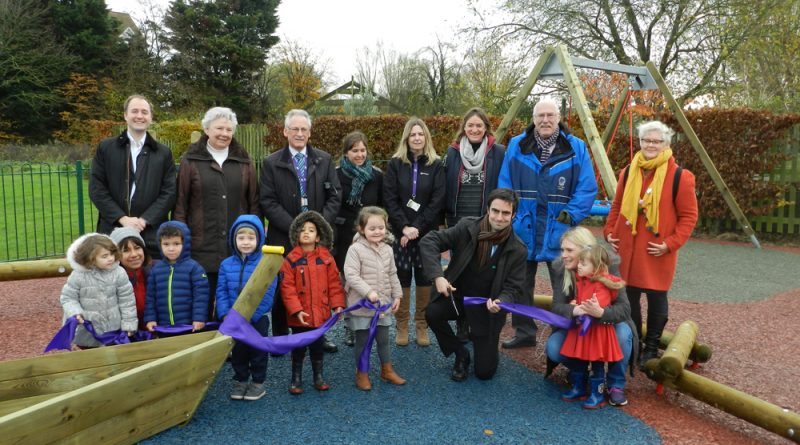 Friends of Kingsmead Field worked in partnership with Canterbury City Council to build the new enhancement.

Riverside Childrens Centre, located near the entrance to the park, helped choose the design and layout of the equipment.

The children from the centre and representatives from the Friends of Kingsmead Field joined the chairman of the council’s Community Commitee, Cllr Neil Baker, to cut the ribbon and open the park.

Cllr Baker said: “It was a lovely opening event and the children were very keen to get playing on their new equipment. A play area was a clear priority from the public consultation so it’s great we have been able to provide something the community wanted.  Together with the hard work by the Friends group to look after the field, we are creating one of Canterbury’s finest open spaces.” The decision to build a play area on the field was a result of the responses to the public consultation on improvements to Kingsmead Field which was carried out in the autumn of 2015.  The play area was one of the top priorities, as well as the installation of a footpath to the field, a wildflower meadow and tree planting.

Recent enhancements to the field by the council include new picnic benches after previous ones were vandalised, the perimeter footpath and new cycle racks.

The play area has 15 pieces of equipment built by play company Eibe, including balance beams, a boat, a climbing unit and more.

Sian Pettman, Secretary of The Friends of Kingsmead Field, said: “The decision to build a play area on the field came about as a result of the responses to the public consultation on improvements to Kingsmead Field which was carried out in the autumn of 2015.  The top priorities from the consultation were the planing of a wildflower meadow, the installation of a footpath around the field, the creation of a play area and tree planting.
Judging from the conversations which I have had with parents, the play area is proving very popular.

Local Mum Katie Pye agrees:  “My 1 and 3 year old love it.  I think this field is an invaluable space for local residents, especially those of us with small gardens or no outside space. I think the play area will really come into its own as the weather warms up and more families hear about it.  I’m sure the local children and any visitors will be thrilled with it and its close proximity to the children’s centre will be of benefit to.”