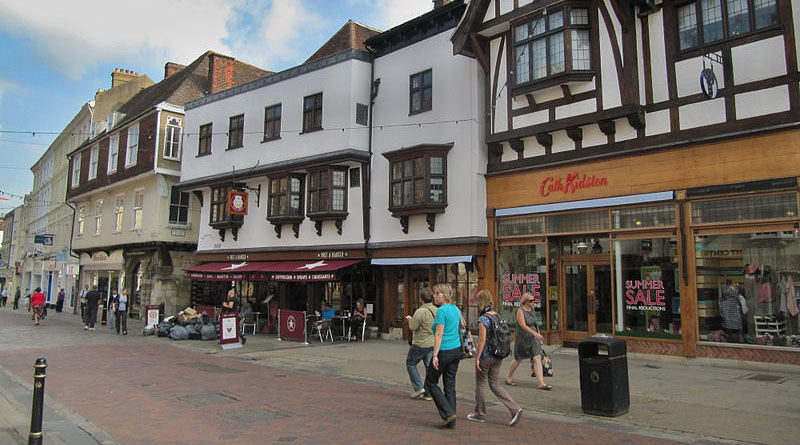 Canterbury can’t help but look emptier after the demolishment of some of the biggest high street names in the area. The shutters and boarded up shops are almost daunting and it is unbelievable to think, just months earlier, they were packed with eager shoppers.

Big high street names such as Nason’s and PoundWorld have been diminished from the high street famous for its notorious shopping district.

Purchasing items at the click of a button is certainly something Fred Nason did not think of when opening the doors of his independent furniture store in 1929 but, in 2018, online shopping is more popular than ever.

Packed with boutiques, clothing, food stores, and, well, every shop you’ll ever need, Canterbury is certainly a desired shopping destination.

But do people simply prefer the comfort of their own home?

ICYMI: Chris & Co. 💼 In case you missed it: Chris spoke to Andrew Tate and Oliver Doubleday about the closing of Nasons in Canterbury and why high street shops may be having a hard time staying afloat. Catch the full episode here: https://t.co/6ADGcqNdgs https://t.co/k6ejF2miFV

The rise of online retailers, such as Amazon, mean that queueing in a busy store, or fighting over that last pair of jeans on the shelf, could soon be a thing of the past.

By ordering online, you’re almost guaranteed to get exactly what you want, and you don’t need to go far to get it. Also, many online shops are cheaper than their high street rivals, with many people opting to buy from Ebay and Amazon instead.

Canterbury high street has recently seen a decrease in footfall in the busy town. Tourism and the amount of people in the city doesn’t seem to be an issue – but people aren’t spending as much in stores anymore.

In September this year, there was an overall -6.6% year over year change in sales performance, which is a -11.3% change from September last year. Consumer spending in September has resulted in the weakest sales growth this year.

Sadly it’s the last day of #Nasons in #Canterbury 😥- end of an era! I like the tribute poem the staff have given to their boss….

“It is a challenging time for retail and food & beverage nationally and Canterbury is not immune to that. However the city’s  vacancy rates are the lowest in the county and well below national average.”

A spokesperson for Whitefriars added:

“As far as Whitefriars goes, these are challenging times for all retailers and some are faring better than others. Our footfall remains slightly down on previous years, which may well be due to the increasing use of online shopping.

Uncertainty regarding Brexit is doubtless taking its toll and it may be harder for smaller, independent retailers to weather this storm.”