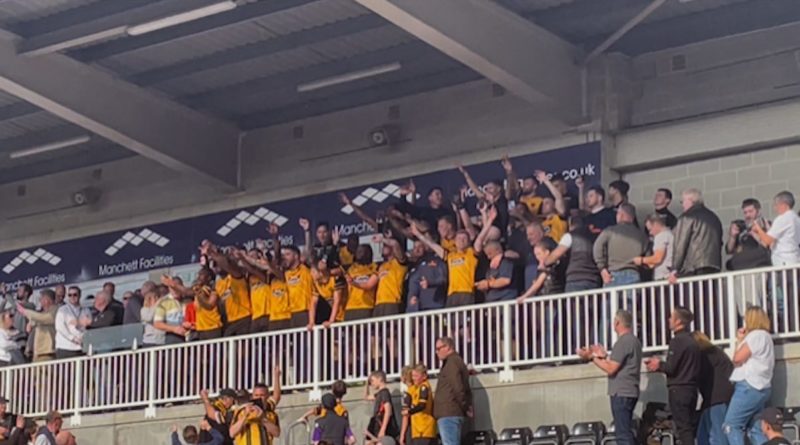 While Gillingham FC were facing the reality of relegation to League 2 on Saturday, Maidstone United fans were celebrating long into the night.

Maidstone’s 3-1 win over Chelmsford saw them crowned champions of the National League South in front of a packed out Gallagher Stadium.

At Priestfield, Gillingham fans witnessed a 2-0 defeat to Rotherham that ended all survival hopes.

Maidstone’s victory saw them promoted to the Vanarama National League for the first time since 2019.

Maidstone United manager, Hakan Hayrettin, was full of pride after their title win.

“It’s been unbelievable what these boys have achieved for us and I’m so proud of them,” he said. “This is up there with one of my greatest achievements, this club is a special club with fantastic support.

“I want us to go away and celebrate now and then focus on the last couple games of the season.”

Gillingham now face the prospect of being in League 2 for the first time since 2013.

It was a familiar story for Gillingham fans, as their team were unable to find the opposition net, making them the lowest scoring side in the division.

Gillingham chairman, Paul Scally, looked towards preparing for next season.

“One thing is for sure, despite the setbacks, we will come back,” he said in his press conference. “Yesterday was difficult but we are all together. We will be a better club next season.”

Yesterday was tough to take.

However we will now dust ourselves down, regroup, refocus and 𝘁𝗼𝗴𝗲𝘁𝗵𝗲𝗿, we will come back stronger in 2022/23. 💪

From everyone at the club, thank you for your excellent support throughout the season, you’ve been simply amazing. 💙👏#Gills pic.twitter.com/fBEGPFSAeD

Going into next season, Maidstone are now just one division below Gillingham.

Gillingham will be looking to rebuild and return to League 1 quickly, whilst Maidstone will believe that the sky is the limit next season.