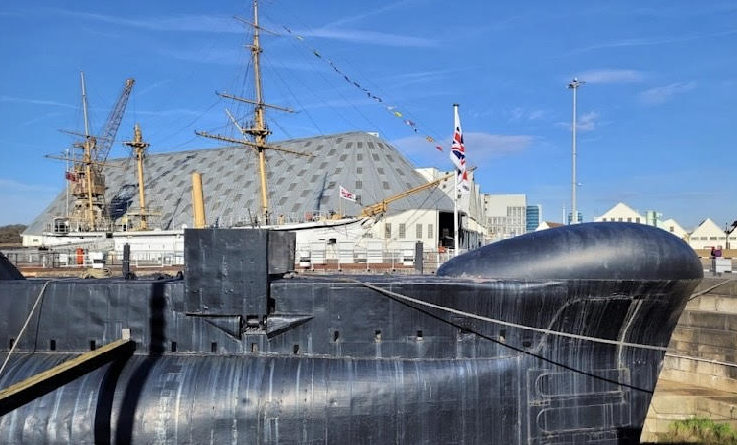 For the 60th anniversary of HMS Ocelot , a former submariner, Chris Reynolds has recalled the smells sounds and sights of living on board a Cold War submarine.

Ocelot was one of 57 submarines built in Chatham between 1908 and 1966 and one of only 13 Oberon-class submarines.

Chris Reynolds was a junior officer on HMS Ocelot, as a qualified submariner, and this was the first submarine he served on.

🎉Happy 60th Birthday #HMSubmarineOCELOT. Our Heritage Engineering and Historic Ships Manager James Morgan gives us a taste of some of the incredible work which has taken place by our #ShipKeepers and #Volunteers over the past few months to get her ready for her big day. pic.twitter.com/GtOTx8KuVm

Despite the bad conditions, lack of privacy, no showers on board and being confined for weeks on end, Chris Reynolds love for the vessel is evident when he spoke about his time on board.

After 27 years of service, HMS Ocelot has returned to its home, Chatham Dockyard in 1991, and today it is one of the main attractions at the Historic Dockyard and it is also possible for visitors to climb abroad for a tour.

“As a Lieutenant my role as fifth hand and torpedo officer meant that I was responsible for the fronds and torpedo movements on board. I would stand on the casing controlling the crane which loaded and offloaded the torpedoes. The torpedo loading hatch is now used for guests to access the submarine.”

OCELOT60: Get a taste of what it sounded like in the communications room onboard a Cold War Submarine. This forms part of a new soundscape project that has helped to bring OCELOT to life, ready for her 60th birthday celebrations this week. pic.twitter.com/Di94MuTzzs

Another vital job was also done by Chris on the board, which was being a correspondence officer. He would be presented with several sacks of official mails, and this job was a laborious job before the existence of computers.

“All this was conducted in my tiny alcove at the far end of the Ward Room using a typewriter, carbon paper and snow pale – it was a time before iPhones and iPads.”

Life on board submarines needed to get used to the rotating shifts, with 6 hours on and 6 hours off throughout the time on the sea, and the smell of diesel- their job was different to life in the surface fleet of the Navy.

“If you made a mistake it was submarine rules to own up to it – submariners don’t lie because anyone can sink a submarine by turning the wrong valve, for example, so you needed to say when you’d made a mistake. And as long as you didn’t keep doing it, you were okay.” said Chris.

Chris has gained many skills and HMS Ocelot taught him many things during his serving time on board. He also took forward these skills to his own command post on HMS Ocelot’s sister submarine, HMS Otter.

He has continued to do his passion for the submarine flotilla. He is an ambassador at the Historic Dockyard Chatham and he helps to train the guides on HMS Ocelot.

“The diesel submarines were really special – they were very, very, very quiet – once you shut off and went deep they were extremely hard to detect.”

The workers on board had to get used to the smell, however, Chris has never saw a case of claustrophobia.

On the board there were no showers or washing machines, and the submariners were given small amount of water for personal use. The men on the board, would often just wear their pants and as they were unable to wash them, they wore them one way for a week, then wore them back to front for the next week, and the following two weeks the underwear was turned inside out.

When they were having their six hours off, submariners would eat, sleep, and also squeeze in a film if they had the opportunity.

Ocelot would stayed submerged for weeks in the clandestine battle against the Soviet Navy.

To become a British submariner there was a hard task included which was to escape from a deep underwater chamber without breathing and being locked in submerged darkened “pressure pot” spaces.

The crew had to walk on rubber mats or wear rubber-soled shoes and were said to have spoken in whispers due to the covert nature of many of their assignments and the need to go undetected.

The tour of HMS Ocelot today at Chatham shows how confined the spaces were, and many more interesting facts.

Chris’ fondness for HMS Ocelot and the submarine flotilla remains, even if  there were tough living conditions.

“I’d go back to sea on a submarine today if I could.”

HMS Ocelot will host the 60th anniversary party on Saturday. Chris will meet up with his ‘band of brothers’ – a tight-knit group of former submarine captains who all completed the Perisher course, an elite training course for submarine captains, as well as servicemen who served on Ocelot.

Chris will also be conducting a tour of HMS Ocelot and telling people what it was like on board.