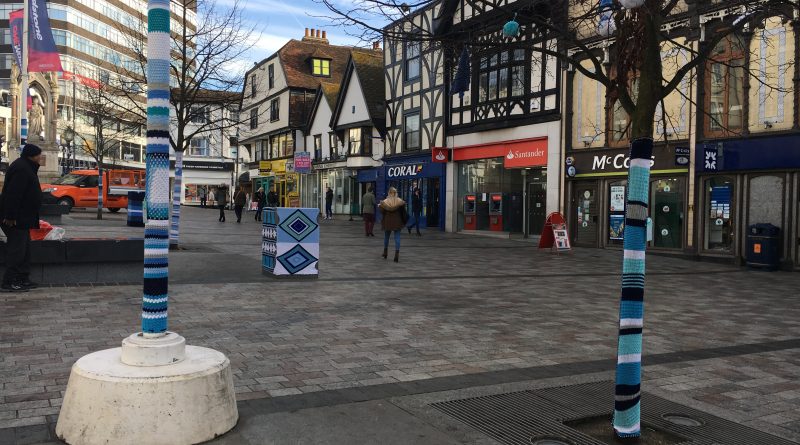 Maidstone’s Jubilee Square has been decorated in fitted knit garments.

Trees, arm rests and lampposts have all been wrapped in knitted or crocheted ‘jumpers’ this December. Knitted stars and lanterns have also been tied up, and pom-poms hang from branches.

The colour theme for the exhibition is white, different shades of blue, and grey.

The creation was put in place by Woolly Maids who form a group of Yarnbombers.

Yarnbombing is a new form of street art first seen in 2002, where knitters and crocheters bring colour and warmth to a community.

Maidstone residents had mixed opinions on the display.

One man, of no fixed address, commented on the display saying: “They should have gone to Specsavers!”

“It’s nice to see it [Jubilee Square] brightened up, I’ve never seen something like it, but I don’t really understand what it’s for.”

The displays can be dismantled once the colour fades or the pieces begin to break, unlike other forms of street art such as graffiti which is permanent.

“We knit and put our designs into Maidstone town centre to make people smile and brighten it up a bit, especially in winter, but I think we’ll do it again in spring and summer,” Angela Jarvis, Woolly Maids knitter.

Preparation for the Christmas knitting started in late September when teams went into the town centre to measure the lengths and widths of areas they wanted to cover and buying the yarn.

The team then had two months to make their creations.

Previously Woolly Maids made a display for the Kent County Show that took place in July earlier this year.