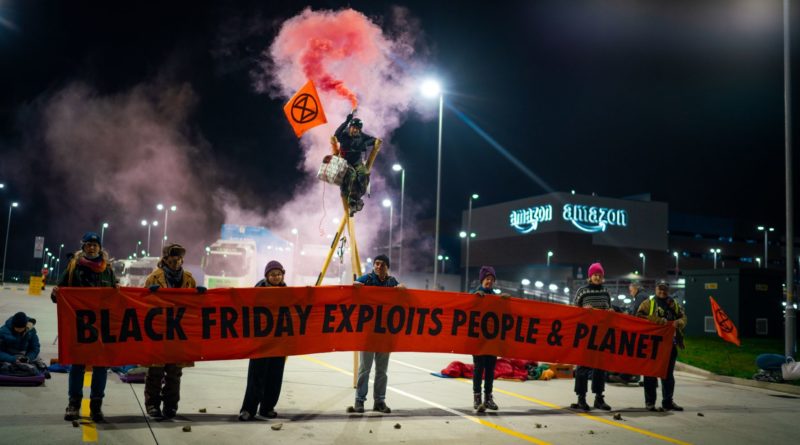 At around 4 am today, Extinction Rebellion protestors blockaded an Amazon warehouse in Dartford in an attempt to halt deliveries across the South East on one of the busiest commercial days of the year – Black Friday.

They have also targeted 12 other Amazon depots across the country and have said that they are aiming to stay for 48 hours.

Extinction Rebellion have released tweets about their reasons for staging the protest on Black Friday, the comment: “Did you know? #Amazon’s #climate damaging carbon emissions are more than a medium-sized country! And growing by 19% every year! This must change or our planet will become uninhabitable. Infinite growth is impossible on a finite planet.”

By 9am, the traffic was free flowing and a police presence could be seen.

In a YouTube livestream, the protestors are seen outside European, UK and US warehouses collectively.

Hours after the protest drew public attention, people flocked to social media to express their opinions.

Extinction Rebellion need to be made extinct

I see @ExtinctionR are pissing people off again.

Keep up the good work…that’s going to win them over, honestly 😏

The Kent Police have issued a statement saying that they are on scene and dealing with the protest activities.

Our officers are dealing with protest activity at a distribution depot in the Littlebrook Business Centre near #Dartford.

We are working to end the protest and are in liaison with partner agencies, and the affected business, to minimise disruption.https://t.co/Jq6adLSp8N