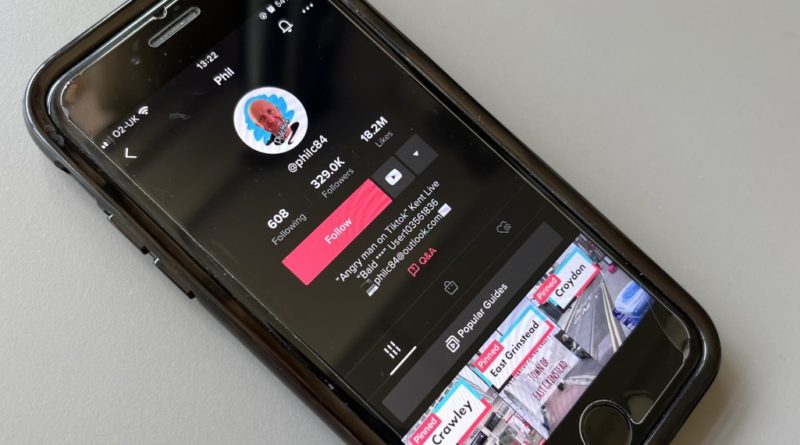 Kent has taken a hit from a passionate TikTok user who has slated towns in the county online.

Phil Carr, known as philc84, comes from Epsom in Surrey and has been leaving savage reviews about Kentish towns and described the county’s only city, Canterbury, as a “Godforsaken hellhole” adding that it deserves its place as number 12 on the worst places to live in England.

Overall I give Kent zero out of ten.

But it’s not just Canterbury that has taken a hit from this intense reviewer. He’s flooded his feed with other reviews of Kent locations including Dungeness, Maidstone and Sevenoaks.

So why is this TikTok user using his platform to share his hilarious yet damning opinions?

With 328.9k followers and 18.2 million likes, it begs the question, are people agreeing with his strong statements in his videos, or laughing at how passionately he is slating the many locations?

Some users have commented on his videos, confused by his savage opinions.

Didn’t expect to open this app to see my workplace getting slaughtered. I swear St [Augustine’s] has some great stories.

What the heck I like Canterbury it’s a nice little town.

Why was this so dramatic.

For someone who lived in Canterbury for 2 years now, I have to disagree; it’s a beautiful rural city with a wide range of culture.

Despite this, others have somewhat agreed with philc84.

Canterbury is so pretty with lots of nice spots but good god I would not want to actually live there.

As a Canterbury resident, everything you’ve said it completely correct.

He calls himself an “enthusiastic amateur” when it comes to making jokes.

In a TikTok video he admitted: “When I go to these hellholes to make jokes, I tend to have a little joke around.

He has also taken aim at Sevenoaks saying he “had his tetanus jab” and came to Kent to see Sevenoaks after seeing it was widely considered to be ‘Kent’s poshest town’.

Yes that’s right, I’ve had a tetanus jab and I’ve come to Kent to see Sevenoaks and what all the fuss is about.

In his TikTok where he ‘has to venture into the county due to a work emergency’ the self-proclaimed enthusiastic amateur hits hard at the county saying that people who live there live in sheds that can house up to eight people, and they have no jobs to go to.

“I had to venture into the land that Darwin forgot.”

The TikToker hashtags UK comedy giving us some hope that maybe he doesn’t hate the county, but he still throws endless insults.

OK #kent let’s call it quotes now. You’re a rubbish county but you know it as much as we all do. #britishhumour #ukcomedy

At the start of the video he says: “It was only a few weeks ago that I had my public spat with Kent, which I clearly won.”

This was after local news outlet KentLive wrote a story about his opinionated videos.

The Surrey resident said he was “glad to get back to a proper county. Overall I give Kent zero out of ten.”

He even joked and claimed that a new Coronavirus mutation came from Kent: “To everyone outside of the UK, please stop calling this new mutation of the Coronavirus the British strain.

“It’s from a place called Kent and we’re just as angry at them as you lot are. It is the Kent mutation.”

He goes on to say that Kent does two things. They are the porch of England where lorries from our former friends in Europe arrive and it’s the only place remotely near London that offers truly affordable housing.

Maybe his second point about affordable housing could be seen as a positive?

It’s safe to say that since this TikTok user has over 300,000 followers, he will keep making these savage reviews across the county.

When given the challenge to make a positive video about Kent, Phil did make a TikTok, but didn’t actually mention anything positive.

He says: “Well this isn’t going to be easy but there is one nice thing about Kent and that is without a doubt…” But the rest of his sentence is flooded out by a train going past! So, we still haven’t heard the TikToker say anything positive about the county!”