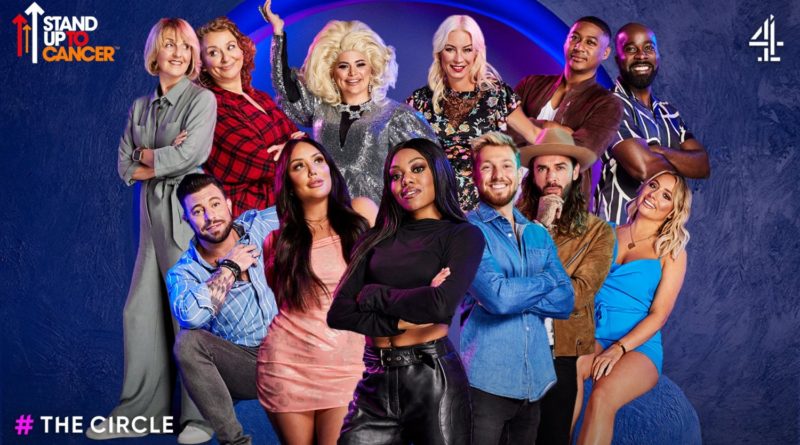 This year The Circle has created a Celebrity special for Stand Up to Cancer.

What is The Circle?

The Circle is a new gameshow all about being popular online. The contestants can either choose to be themselves or someone else, i.e a catfish.

Contestants all live in separate apartments in the same building. They create a profile and can talk to each-other through an online platform called The Circle. If they choose to be a catfish, it is important they don’t blow their cover otherwise they are more likely to get voted off the show.

There are rankings where the contestants rate each-other on who they like the most. Overall, the most popular people will become influencers and hold more power than the other contestants. They are given various powers and sometimes the two most popular people from the ranking will have to choose someone to ‘block.’ This means they have to leave the competition immediately.

This year’s contestants are:

Some contestants are working together to be someone else and a lot of people are being catfish. Here’s who is who:

Saffron, Denise and Duncan have all been playing as themselves.

So far, everyone has been on their A-game. But there have been a few mishaps…

Pete and Sam have almost exposed they are playing the game together in almost saying ‘we’ instead of ‘I’ when talking to their fellow players.

Kaye and Nadia have had a tumble which was noticed by several fellow players. The Loose Women hosts are playing as Gemma Collins and in a game, spelt one of her close friends Amy Childs’ name wrong. Players were suspicious of the team since this mistake.

Lady Leshurr is using her knowledge as a rapper to her advantage in pretending to be Big Narstie. Although, she has had a couple of close calls, she is doing well and none of the other players seem too suspicious.

Baga Chipz has been playing confidently as their close friend Kim Woodburn – they have been working hard to speak as she would, and has not been suspected as a catfish.

Will it be a catfish that takes the win as being most popular, or someone who has been themselves? We find out tonight at 9pm on Channel 4.

The Celebrity Circle final is upon us, and all will be revealed to our Players…

Find out who WINS at 9pm on @channel4! 👑 #TheCircle pic.twitter.com/4xzrbG9O8L