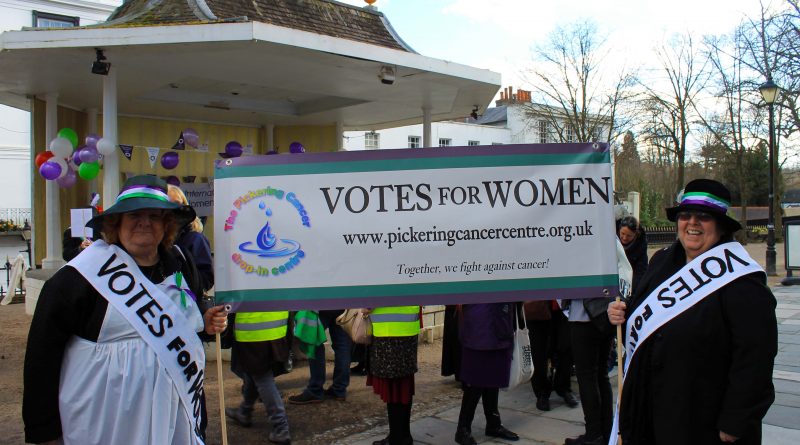 Hundreds marched through Tunbridge Wells to celebrate local suffragettes and the 100th anniversary of women being given the vote.

Re-enactment performances held by local theatre company ‘CREATE’ paid tribute to local women such as Amelia Scott, who was the town’s first female councillor and part of the non-violent Suffragist movement.

Tunbridge Wells suffragettes singing ‘The March of the Women’ pic.twitter.com/4LVZrjPV24

Local councillor Jane March said: “International Womens Day is important because people like Amelia Scott paved the way for all of us women councillors and if she hadn’t stepped up to the mark then we‘d be way behind.  So we’re really following in her footsteps.

It is incredibly important to me that we have women here today but that we are also supported by men because I think women are going to have difficulty on their own getting everything they want done in the future.”

Many dressed up for the event in Suffragette costumes, military outfits and wore hats they had designed for the Suffragette hat competition that took place in the town centre.

The campaigners marched from the Pantiles to the town hall and ended at the Opera House, which is now a Wetherspoons pub, where famous Suffragette Emily Wilding-Davison interrupted a Liberal Party meeting in 1913.

One of the stops along the route was the local Suffragist shop on Crescent Road, which is now ‘Imago Community’ charity shop.

‘TW Women 100’ is led by an apolitical group of women who organised local events for International Women’s Day to commemorate the centenary of the vote.  In the morning they held a memorial service called ‘Women in History Shouldn’t Be A Mystery’ led by ‘TW Women 100’ member Caroline Auckland.

Caroline Auckland said: “The women of Tunbridge Wells have put aside our political diversity to put together this event to celebrate Tunbridge Wells and put us back on the map because we have such a historic suffragette and suffragist history and we really want to celebrate that. I look forward to showing our young girls how fantastic our history is and what can we achieve in the next hundred years.

I hope everyone will get the message that Tunbridge Wells are really interested in women’s history and are pressing for progress.”