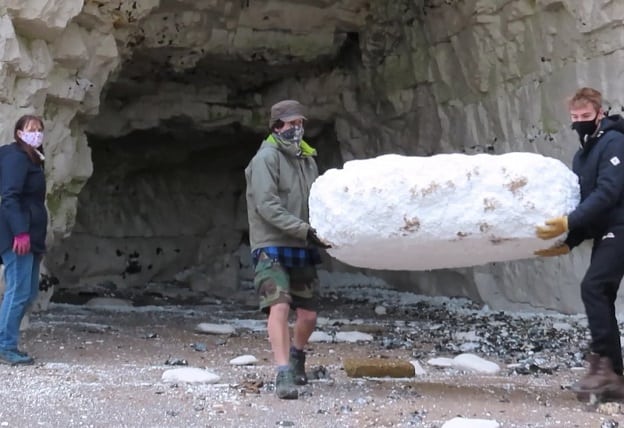 Volunteers have been called to action after Thanet Coastal Wardens found out that a huge block of polystyrene had been washed up in Thanet, shedding thousands of tiny pieces across the Western Undercliff beach, in Ramsgate.

The polystyrene block has been described as “about half the size of a car”. It was washed in from Sandwich Bay on the high tide and southwest winds.

The mess was found by coastal warden Nik Mitchell on Friday. He tried to clear the beach of polystyrene but was defeated by its size and weight. He called in help from other coastal wardens Sam and Greg Bessant and Keith Ross who tackled the block and debris the following day.

Residents Trevor Cooper and his wife also came across the mess and tried to help the wardens. They put out a call on the Thanet and Sandwich Coastal Finds Facebook page.

The pieces of the 8ft by 5ft block that had been bagged up were later removed by Thanet council staff. However, there are still pieces scattered along the entire beach stretch.

Since the find, many residents from Ramsgate and minster have joined forces to clear the beach. Thanet council is also supplying bins specifically for the polystyrene.

Coastal warden Nik is urging anyone who goes for a walk that way to take a bag and help with the clear up. people are asking for sieves and garden raddlers to help split the polystyrene from the sand.