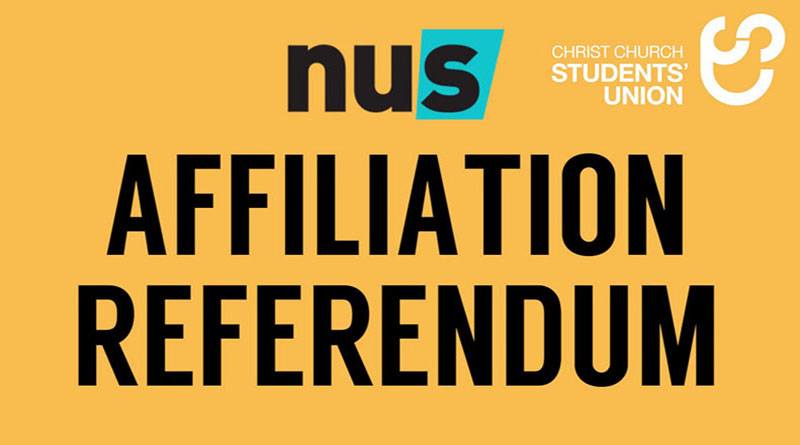 Students at Canterbury Christ Church University are currently voting for whether they want Christ Church Students’ Union to remain affiliated with the National Union of Students (NUS).

So, whether you’re undecided on which way to vote, or perhaps you weren’t aware of it– here is everything you need to know about the NUS Referendum at Christ Church.

What is the National Union of Students (NUS)?

The NUS is the national voice of students and is operated by an elected committee of student representatives, including the President of NUS. Their organisation aims to defend, promote and extend the rights of students and the interests of Student’ Unions across the UK. They also combat discrimination, isolation and injustice through campaigning and targeted action. As well, they help you to get cheap student discounts!

CCSU is affiliated to NUS and always has been.

Why is CCSU holding a referendum?

On the 7th of February this year, Union Council called for a referendum vote for CCSU’s membership to the NUS. The reason for this vote was the growing dissatisfaction for the body politically, it’s in public financial troubles and because Christ Church Students’ Union has never had an affiliation vote in over 40 years.

The result of the referendum which was held in March was declared invalid because of a serious breach of CCSU rules. You can read more about that here.

So CCSU are holding another referendum. This gives you the chance to vote on the question: “Should Christ Church Students’ Union remain affiliated to the National Union of Students?”

You can either vote ‘Yes’ (to remain part of NUS) or ‘No’ (disaffiliating from NUS).

What are the arguments for the ‘Yes’ and ‘No’ campaign?

Here are some of the vital points taken from the CCSU’s factsheet that has been posted around the university, the union and their social media platforms:

The NUS is crucial to ensure our students voice is heard at a national level. They have achieved a number of ”wins” for students over recent years, which it has only been able to do through the legitimacy it gains from being the representative body for 7 million students. A few things that NUS has achieved for students include:

The NUS has been in a crisis for quite some time. Whether that be from it’s utter democratic deficit to its complete failings in being able to handle finances it now clear that NUS no longer represents the interests of Christ Church students. Here are some of the disbenefits of being affiliated with the NUS:

If you want to find out more here is CCSU’s factsheet for unbiased information about the pros and cons of NUS membership.

What do Christ Church students think?

The Canterbury Hub also spoke to two Christ Church students about what campaign they will be backing and why.

Sophie Shannon, Theology student, is backing the ‘Yes’ campaign. She told us:

I am voting for our students’ union to be affiliated with the NUS and I believe that it’s important that they are.

Despite being in a bit of a financial crisis, they have campaigned so much for students and I am one who has benefitted from using the 16-25 railcard and student discount card –  which has helped significantly whilst I’ve been at university.

I think it’s rather embarrassing being apart of the 5% of students that are not affiliated with the NUS, despite them being the voice of students and campaigning for our rights.”

On the other hand, Alistair Bassett, Politics student, told us why he has voted ‘No’ in the NUS Referendum. He said:

I have voted against this time because of the way the NUS behaved in the original vote.

Previously, I was a reluctant remainer. A lot of my friends voted to disaffiliate, however I thought that if we can learn anything from Brexit, the supposed ‘benefits’ from leaving didn’t outweigh the current benefits.

I think disaffiliating ourselves will give us more money to be spent on student activities. This year, there is no summer ball which I think is appalling, given the huge uptake for the uniboob ball, there is evidence that there is demand for one. I think the events put on by the SU, apart from the quiz, are pretty rubbish and any money raised should be reinvested.’’

How and when can I vote?

Voting opened at 12pm on Wednesday 1st May and closes at 12pm on Friday 3rd of May. To cast your vote, click here.

What’s next after the vote?

If the majority of students vote ‘Yes’ then CCSU will remain affiliated to NUS.

If the majority of students vote to back the ‘No’ campaign, then CCSU will disaffiliate from NUS.

The NUS referendum requires 250 votes to determine the outcome. If the vote doesn’t reach 250 then CCSU will remain affiliated with NUS.

The result will be announced at 4pm on Friday May 3rd on CCSU’s website and their social media channels – so keep your eyes peeled!

WATCH the video below to learn more about whether Christ Church Students’ Union should be affiliated with the NUS: