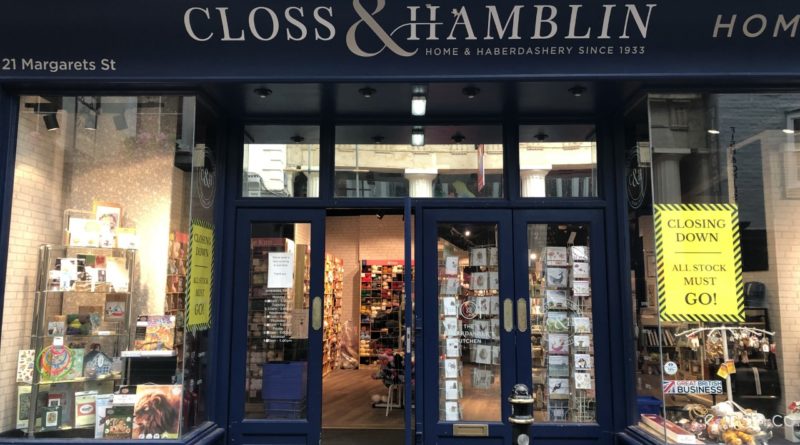 The declining but important high street is what many towns and small cities focus on as the centre of their appeal for tourists and their own residents, but Covid-19 has damaged them even more.

However, family run and small businesses along with boutique shops and cafes are struggling not only due to the pandemic’s toll on the economy but also due to the fact that online shopping has boomed over the last two to three years with giants like Amazon, monopolising the market.

The local Canterbury high street has many independent shops, some are family run too which the British public usually like to support.

A family run haberdashery in Canterbury called Closs and Hamblin (C&H), are shutting it’s craft doors after over ten years in Canterbury, it is one of their younger stores but due to the pandemic it has been a weaker one, in a city full of students not many do crafting and C&H’s prices are quite pricey.

Closing Down Sale at our old Canterbury Store!

One customer commented that it’ll be sad to see them go as the next most reliable store is in Whitstable and even though she drives it can increase the cost by quite a lot as she crafts frequently.

Closs and Hamblin have been a family run business over Kent, Sussex and Hampshire for the last 85 years, this year they will be closing three of their crafting stores.

However, they will still be open in  Canterbury but only as a blind and curtain fitting company, which is also part of their aesthetic.

The store that is currently tucked away in a quiet street of Canterbury, does have loyal customers but they can only help so much the when the industry isn’t as lucrative as it used to be due to large corporations.