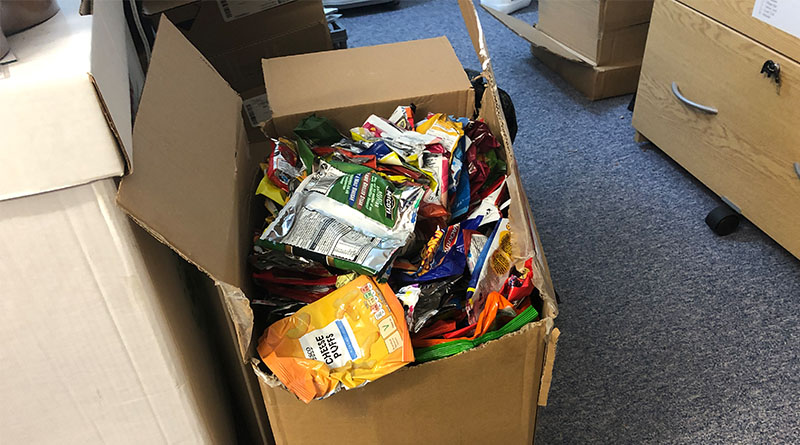 Today, over 600 crisp packets collected by residents in Singleton will be sent off and made into new products as part of a plastic recycling initiative.

Great Chart with Singleton Parish Clerk, Aniko Szocs started the scheme within the community in March through the recycling company TerraCycle. Since then, four collection points have been set up around the village in order to collect the crisp packets. These include two public points at Singleton McColl’s and Singleton Village Hall, as well as two private points at Singleton Environment Centre and Great Chart Primary.

Once the packets are received at TerraCycle, they will be made into items such as picnic benches, wheelie bins and even fleeces.

Aniko said: “All across Kent from Dartford, Gravesend, Maidstone to here in Ashford, the schemes are in place and people are becoming more aware and wanting to take part.”

Whilst the scheme is helping the environment, it is also raising money for charities, as 1p is given back to the community for every crisp packet sent. Singleton are donating their money to the Kent, Surrey & Sussex Air Ambulance.

Aniko added: “Just 2 weeks ago the air ambulance was needed in Singleton and knowing that we are contributing to the operation of the Air Ambulance is absolutely fantastic so overall it’s a really good scheme.”

Adam Hunter is the local coordinator of the programme and visits many of the sites, emptying boxes with other volunteers in his spare time. He said: “I’m chuffed to bits but not surprised just how successful Singleton has been.

“People want to recycle and seem genuinely shocked when we tell them it takes over 32 years for a crisp packet to bio degrade.

“Aniko is amazing and has been publishing and making local residents aware how they can not only help the environment but help raise funds for Air Ambulance Kent Surrey and Sussex too.”

The scheme is part of a national bid to crack down on plastic waste first encouraged by a protest against Walker’s crisp packaging last year.

Adam continued; “People should get involved to help divert items that can be recycled into new products. This stops items going to landfill and incineration.

“Crisp packets are due to be changed to recycled packs by 2025. Until then that’s around 240 trillion packs being thrown away.”

For more information on how to set up a scheme in your area, visit the Facebook page.

Listen to the full interview with Aniko Szocs: