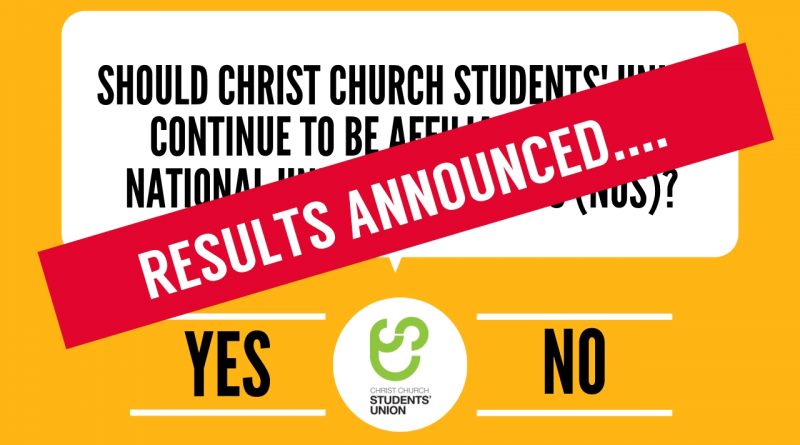 Less than 2% of all students at CCCU voted to remain affiliated with the NUS today (May 3).

378 students voted in total, with 204 backing the yes campaign and 178 voting to disaffiliate.

The Union Council called for a referendum vote for CCSU’s membership to the NUS in February.

The reason for the vote was due to the growing dissatisfaction for the body politically, it’s in public financial troubles and because Christ Church Students’ Union has never had an affiliation vote in over 40 years.

562 students voted in the first referendum, which was held in March, however declared void because of a serious breach of CCSU rules.

WATCH the video below to listen to Kate Little, Head of Engagement and Deputy CEO of Christ Church Students’ Union speaking about this afternoon’s result.

The National Union of Students focuses on promoting, defending and extending the rights of students and student unions across the UK.

They have achieved 16-25 railcards, student discount (totum card), postgraduate loans, council tax exemption for students and they have put the tenancy deposit scheme into the house bill.

However, NUS confirmed late last year that they have been in a financial crisis for quite some time.

Alistair Bassett, Politics student at Canterbury Christ Church University voted to disaffiliate from the NUS and told us why he’s not happy with the result.

“I’m surprised by the vote. I did think we would vote to leave, but I think it’s for the best that we vote to stay as it’s better to change NUS from the inside.

“I am shocked with the lack of students that voted. I think this may be because they probably don’t know enough or don’t care.

“Student politics like real politics has a very nice interest. But I also think there was less campaigning this time round and people probably didn’t care enough to vote for a second time.”

Congratulations on SU for a successful rerunning of the referendum. Looking at the figures can there now be a serious discussion why in such a large student body so few felt willing to engage.

”I don’t believe that the union will be affected by the decision.

“However, not staying with the NUS would have allowed the union to allocate those affiliation fees into different departments within the union, which would have directly benefitted students at Christ Church.”