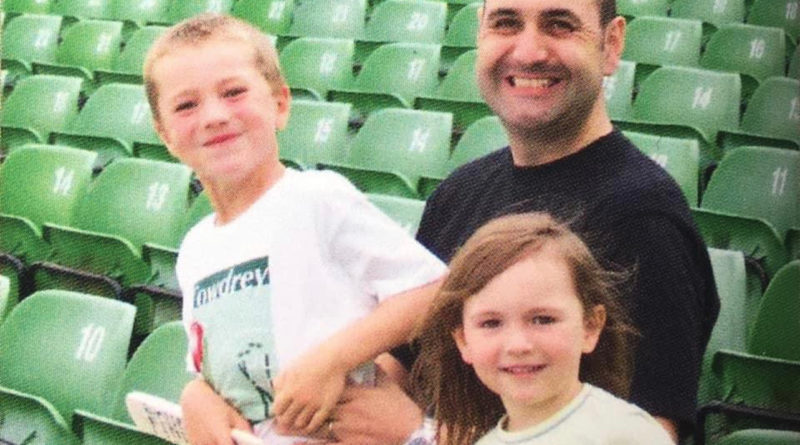 Hythe FC will soon be holding a football match in memory of one of their beloved fans.

Paddy Sullivan took his own life in June 2019, leaving his family lost.

The father-of-three had a passion for football and his family want to share his passion and raising money in a way he would love.

Ben Sullivan, Paddy’s youngest brother said, “you would never have known he was suffering, he would always be offering help to everyone and anyone, before himself it was a massive shock.”

The memorial match will take place at Hythe Town FC with kick-off starting at 2pm on May 7.

The two teams will consist of Sullivan’s friends and colleagues battling it out representing the two men’s mental health charities CALMS and Dads unlimited.

The match was originally meant to take place two years ago but due to covid-19 restrictions the closest date they were able to rearrange to was this Saturday.

The family hope raise money through ticket sales, the food and drink bar an auction and raffle.

That consists of sporting memorabilia from donations given, other prizes such as Messi framed shirt Nespresso coffee machine, £40 John Lewis voucher and a Tyson Fury signed book.

Ben describes the responses from sponsors and attendees for this event has been “amazing, from people wanting to donate amazing things to the raffle, to people giving up their time on the day to help out.”

Paddy was well known to his football and family communities, so it is expected to be a big event on Saturday.

Ben is going to take part in the football match to honour his brother he said he will “swing his leg and hope for the best.”

The Sullivan family had originally been raising money for CALM , the national Campaign Against Living Miserably, and managed to raise £9,000 doing various events in paddy honour.

They decided to involve a local charity so  that’s were ‘Dads Unlimited‘ came in the action helping them with events and raising money.

Tickets for the event are £5 for adults and £1 for children if you are looking for tickets you can pre-order through the just giving link or pay on the door.