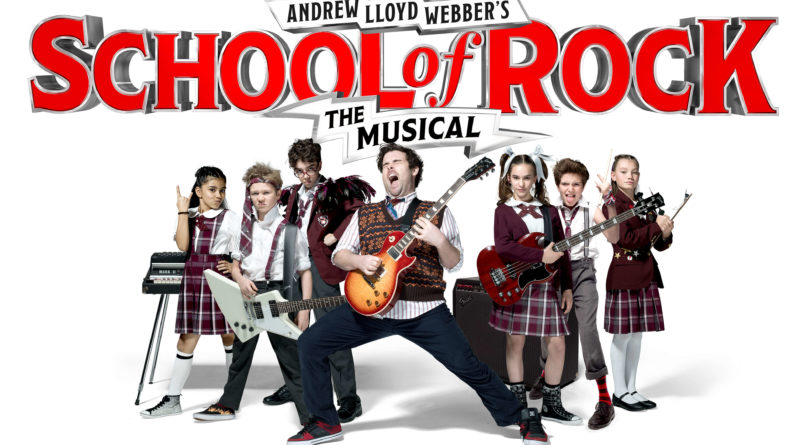 The cult-favourite comedy School of Rock came out back in 2003, directed by Richard Linklater (also known for the Before trilogy, as well as Dazed and Confused) and starring Jack Black as Dewey Finn.

If you haven’t seen the film before, Dewey is a wannabe rockstar who lives with his best friend Ned Schneebly and Ned’s girlfriend Patty, and the latter of whom is increasingly frustrated at the lack of rent Dewey has been paying. She threatens to evict him if he doesn’t come up with the rent by the end of the month.

In a desperate attempt to make some money, he accepts a teaching position offered to Ned by posing as him in a telephone conversation with Rosalie Mullins, the headteacher of prep school Horace Green. A hungover Dewey tries to get away with letting the students have recess all day rather than need to teach them anything, but when he discovers that his class is musically gifted, he is thrilled. He forms a rock band from his students and trains them for the Battle of the Bands, the competition he was working towards with his band No Vacancy before they kicked him out.

Eventually the school, students and parents find out that Dewey isn’t a licensed teacher and chaos ensues, but the children still have faith in him and continue to perform in the Battle of the Bands.

You just know the musical numbers are going to be iconic when you see three words – ‘Andrew Lloyd Webber’. School of Rock is no exception, using the songs from the film as well as an incredible 14 original songs written just for the musical.

Andrew Lloyd Webber bought the rights to the film in 2013 and worked on the songs over the following two years. The script for the show was written by Julian Fellowes (the creator of Downton Abbey), and the musical adaptation opened on Broadway in late 2015.

I laughed. I cried. I rocked! – Jack Black

The show ran on Broadway for over three years, closing in early 2019. In 2016 the show was brought to England, and ran on the West End for four years, and was also taken on a US tour and an Australasian tour between 2016 and 2020.

The UK tour started in September 2021, and will finish in Bournemouth this August. The show is currently in Canterbury, taking place at The Marlowe from 19-30 April.

In Tuesday night’s show (26 April), Dewey was played by Jake Sharp. Strangely, Jake is listed as ‘Alternate Dewey Finn’ in the program like he was in the West End run, but has played the main role for the UK tour. Jake’s performance was a masculine, edgy and intense personification of Dewey, with heavy emphasis on the comedic lines. His energy was electric, and his singing voice is next-level.

Last Thursday’s show (21 April) saw Dewey being played by understudy Alex Tomkins. In the program, Alex is not listed as an alternate Dewey Finn at all – he is credited as a supporting actor in the roles of ‘Mr Wagner/Billy’s dad/Jeff’. However, his performance was outstanding. His characterisation of Dewey was exactly as Jack Black played him, but it didn’t seem like a Jack Black tribute, it just felt like he was meant to be in the role.

Of the two Deweys, Jake’s voice was slightly stronger and Alex’s characterisation was closer to the original, but both were incredibly convincing performances.

The script effectively brought the film into 2022, including up-to-date cultural references without becoming a farce, and further diversifying the characters without feeling like they were ‘box-ticking’. In the film, shy singer Tomika is the child of her biological mother and father, but this adaptation sees her as the adopted child of two gay fathers. This added representation of non-traditional family models is excellent to see, and didn’t feel like they only did it for the sake of it – her dads are solid characters in their own right.

The musical takes a deeper look into the lives of the children than the film does. A particular highlight is the emotional song ‘If Only You Would Listen’, which highlights the struggles the children face at home with their parents.

The personality of Miss Mullins is further explored in the musical as well, and her song ‘Where Did the Rock Go?’ is another incredible addition to the show.

Is it better than the film?

Genuinely, yes. The film is undoubtedly iconic, and you can’t not love it, but the musical was just impressive on another level. It takes the storylines deeper than the film does and is more emotional, but is still just as funny and light-hearted. If you love the film and are sceptical about the musical, don’t be. It’s completely worth the watch and could arguably be one of the best film-to-musical adaptations ever. Think ‘Mamma Mia!’s musical-to-film adaptation, but in reverse.

There are still tickets available for tonight’s 7pm performance at the Marlowe, as well as tomorrow’s 2pm and 7pm shows.
Don’t miss out – head to The Marlowe’s booking page to grab a seat!

See here for more lifestyle content from the Canterbury Hub.