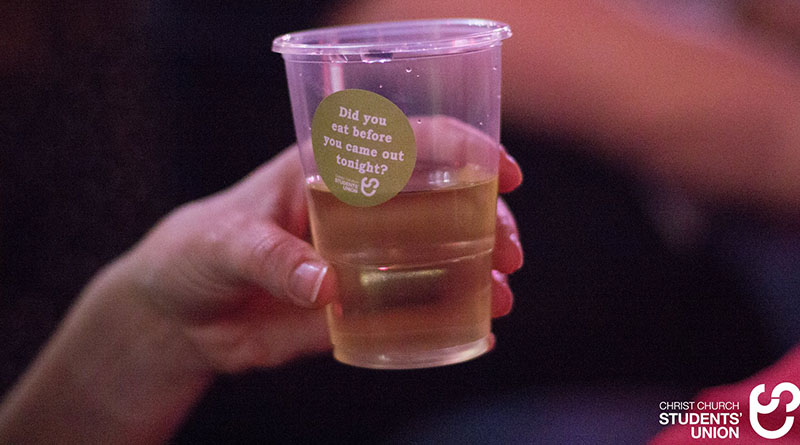 The stickers say things such as “Look out for your mate” and “Did you eat before you came out tonight?” to prompt thoughts in students minds to encourage safety when alcohol is involved.

Wednesday nights at the Students’ Union host the social evenings of sporting events which often end up in Club Chemistry.

This often leaves a large number of students often in a vulnerable state after drinking too much alcohol or exceeding their personal limits.

After a day of sports games and lectures many students will not eat enough food to line their stomach or end up left alone after losing their friends on a night out or wandering off which can cause situations which could otherwise have been avoided.

The introduction of these stickers could prompt one simple thought in somebody which could make a huge difference to themselves, their friends or how they go about their nights out in future.

Alexandra Clifford, MA History student said: “I think the stickers are a great move by the Students Union.

“Little reminders to eat before drinking, and to watch out for friends will help to stop students getting into dangerous situations.”

Another student Alfie Tedder, who is in his second year of studying PR said: “The new stickers that have been put on the cups at the SU are a great idea but I don’t think putting them on cups is the right way to go about it.

“I think trying to make people alcohol aware is very important and some people do not know their limits but placing them on cups may not actually be that effective.

“It may be better practise to actually put up posters or leave leaflets on the bar that people can pick up when they are waiting to be served as they are more likely to actually pay attention if they pick one up out of choice.”

We hope everyone enjoys a fun and safe night out.

Ellie Martin, Advice and Projects Coordinator of the Students’ Union said: “This is a new initiative from a wellbeing perspective to encourage students to think about their own safety and that of their friends, we hope everyone enjoys a fun and safe night out.”