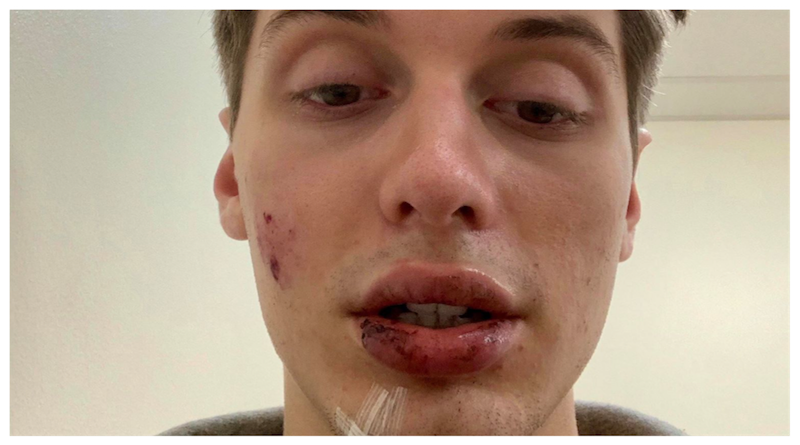 A Canterbury student was left with a fractured jaw and cracked teeth after a brutal assault in Canterbury.

Jonathon Wigmore, 21, was allegedly attacked by a random stranger who left him unconscious on Monday evening (April 29).

The Canterbury Christ Church University student, who was celebrating the end of his degree, was walking home from town centre before being punched in the head.

Jonathon said: “I was walking back to a friend’s house around 6pm alone after handing in my dissertation that morning.

“As I was walking, I felt a punch on the side of my head and I can’t remember what happened from that point. I just remember waking up in hospital after being taken in an ambulance.”

He was found unconscious in a garden by Craddock Road and immediately taken to hospital.

The unfortunate incident left the Psychology student with a fractured and displaced jaw and three cracked teeth.

Jonathon continued: “I didn’t see anyone’s face or understand if there was any particular reason for the attack.

“I’m told that I must have attempted to flee as I vaulted a fence and lost consciousness in someone’s garden before they found me and called an ambulance.”

The attacker remains unknown, but Kent Police are pleading the public for any information about the incident.

A spokesperson for Kent Police said: “Officers were called at around 12:25pm on April 30, to reports of an assault on a main in Craddock Road, Canterbury, in the evening of April 29.

“The victim was taken to hospital and has subsequently been released. Police are investigating and anyone with information should contact us quoting 30-714.”

A GoFundMe page has been launched to help to pay for the student’s dental work. Almost £400 has been raised for Jonathon in under 48 hours.

He added: “As a student, I know I was going to struggle to pay the dental bills. So it’s been incredible to see everyone be so generous. I couldn’t believe it.

If you wish to help fund Jonathon’s dental costs, head over to the GoFundMe page here.