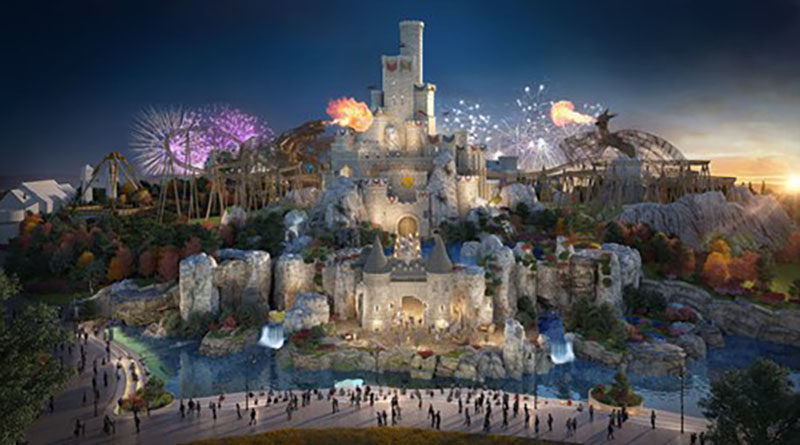 The London Resort that is being built in Swanscombe, Kent, has just revealed new artwork for the set up of their six lands that will be created.

The pictures are the first that have been released since The London Resort announced that they have a partnership with the BBC, ITV Studios and most recently Paramount Pictures. Four pictures have been released hinting at the “next generation” rides and the different types of experiences people should expect when the park opens in 2024.

EDF Energy aims to make The London Resort one of the “most sustainable, major theme park destination in the world”.

PY Gerbeau the Chief Executive of London Resort Company Holdings (LRCH) claims: “We are creating a first – class theme park. A destination that maximises all the new, immersive and interactive technologies and experiences in the world.”

He carries on stating that they “won’t just be creating a world class leisure destination, it will also be one of the most sustainable theme parks on the planet.”

The six lands of The London Resort

The London Resort have stated in a press release that visitors will have to walk through the grand plaza to get to the entrance of The London Resort. This will lead the guests through to ‘The High Street’ which is the first land. It will be filled with shops, restaurants, hotels, convention centre and a first-class water park.

The second land is The Woods, which is an enchanted realm. This is where the young and the young-at-heart will be able to step in the pages of a storybook and embark on adventures that put “a fresh spin on beloved storytime, fables and fairy tales”.

From The Woods, the journey continues into The Kingdom – a realm full of swords, dragons, legends and sorcery. This land converts England into a dark and ancient place full of threatening and imposing castles and “mystical Arthurian legends”.

The Isles is another land full of giant creatures, mythical beasts and full of adventures at the crossroads of your imagination and reality.

We will then be travelling with the future in The Jungle. It is an overgrown environment, spilling with ancient secrets, shocking discoveries and strange mythical artefacts that will be transported to the present by inquisitive explorers.

The final land is dedicated to the futuristic experiences; alien encounters and big thrill rides, The Starport. This is a bustling 23rd century landing zone that will launch the visitors into a thrilling science-friction adventures that will be out of this world!

Brits have taken a negative turn to the idea of The London Resort. Sarah Hill commented “every time there’s a new announcement about it, another couple of years has been added to the timescale! Getting so boring now. Will it ever happen”.

However others with a positive outlook have gone to Twitter. Maame comments that “The London Resort concept artwork looks so cute. It’s so close to me too”.

The London Resort concept artwork looks so cute 🥺. It’s so close to me too 🥺 Disneyland everyday lol