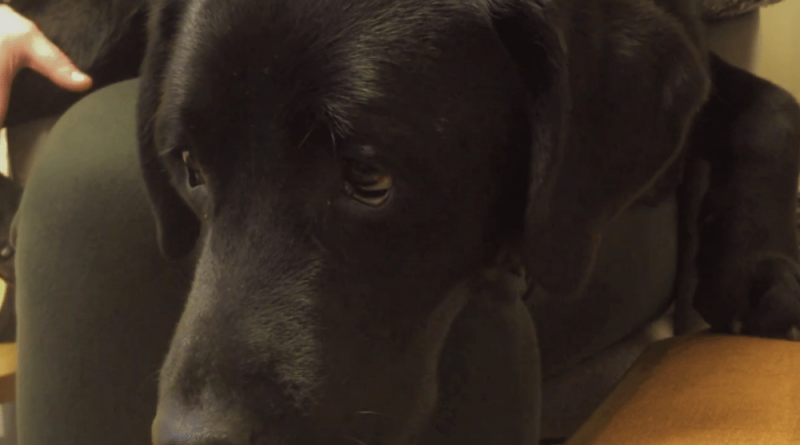 It’s not every day that you get to interview a dog.

Then again, Oliver isn’t your average dog – for starters, he has his own student ID.

The two-year old Labrador is a victim support puppy hired by Canterbury Christ Church University, and is trained to help people by providing companionship. He offers non-judgemental support to those that need it.

He has spent his whole life being trained to help people in various ways, including offering support to children who have to go to court, and providing companionship to people with autism.

And if that wasn’t enough, he also lends an ear – albeit a fluffy one – to stressed students at the university.

According to Oliver’s main handler, Dr. Liz Spruin, Oliver’s companionship has proven to be more effective than any other mental health service on offer at the University. “We look at how being around Oliver can help reduce anxiety and stress for students, especially during exam times,” says Dr. Spruin. “Students will come in to a room, and will have 20 minutes to just stroke Oliver, play with him.

“And what we have found is that Oliver actually decreases stress more than mindfulness or any of the other programs we have on offer.

“When they’re a bit stressed they can have weekly sessions where they can just pet a dog and stroke them.”

An average day for Oliver

Oliver’s role at the university is more than just a support service for students, however. He is employed by Christ Church to take part in research on how dogs can help people who have to go through the justice system.

“In an average day at the university he’ll come into work, he’ll come to a lecture with me,” Dr. Spruin tells me. “He’ll sit there in the lecture and I’ll use him for some examples some time.

“Outside of work, he is a Labrador, a full-blown Labrador”

“At lunch time he gets walked by members of staff. They love walking him – they say it helps their wellbeing. Then in the afternoon he might go and do research, doing things like mock police interviews, or take part in studies on the ‘the benefits of petting dogs’.

“Some of the projects he’s doing now, he’s used in mock police interviews, so we have him come in, and sit with a mock defendant or victim. Then they’ll give their evidence.

“Oliver is also hired by the police to provide support to witnesses – particularly children – whilst they give evidence in the police station or courts.

“He has quite a vast work life balance,” Dr. Spruin tells me. “Sometimes he’ll go work with the police in their training interviews. He’ll help vulnerable people in interviews, providing them comfort.

“Other times he’ll go into court, providing witnesses and victims support before they go in to court.

Oliver is incredibly calm, and sits patiently still for the 20 odd minutes whilst he is being interviewed.

But Dr. Spruin tells me that as soon as his work coat comes off, he will burst into energy.

“Outside of work, he is a Labrador, a full-blown Labrador,” Liz says.

“When he’s working, he’ll always just sit, he’s trained not to move, but when I take off his vest, he just runs and runs.

“He loves running around, he loves chasing balls, he is a 2-year old high energy Labrador. He’ll eat anything, he needs a lot of exercise.

“He’ll get really excited, but he’ll come and sit on the sofa and just lie on me for the whole night. He just cuddles and runs around.”

Oliver will spend the next eight years working at the university, until he retires aged 10.

Once pensioned off, he will live out his days with Liz at her home. But until then, he is ready and raring to give any student at Canterbury Christ Church a good cuddle.